The last of my vacation recap post – our final two days in Vegas were; for us, fairly low key. We slept in again on Saturday and planned our attack for the day over coffee (well, at least I had coffee…I always have coffee.) Did y’all know there is a Taco Bell on the strip where you can get married? Well – there is and you can and while on one got married, we did make our way into the middle of Las Vegas for lunch at the Taco Bell Cantina!

The music in the Taco Bell Cantina is a continuous bass that thumps and bumps while you order your quesadilla and munch on your nachos bell grande…or whatever else you might be persuaded to order. You can also get Taco Bell’s signature Mountain Dew slush drinks…with alcohol, of course. I stuck with Sprite and we found a bar seat on the second floor that offered some really good views of the Strip and people watching – all with a booming beat in the background. 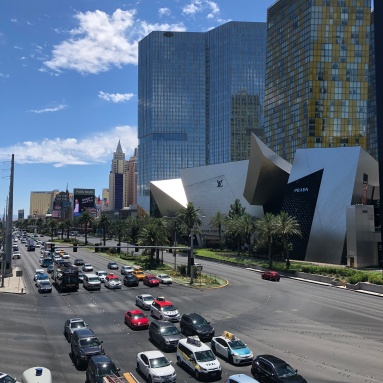 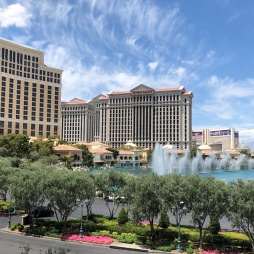 We parked at the Bellagio and we slowly made our way back toward the grand hotel, taking in the sight and sounds (there are so many sounds) of the Vegas strip as we walked. I was able to snap some great pictures from a walkway that stretched across the strip and we ducked into the Cosmopolitan to take refuge in the air conditioning for a bit…

There was a gigantic floor to ceiling chandelier that was not only breathtaking to look at but also housed a bar called – Chandelier. Not exactly thinking outside the box, but it was still pretty to look at! We hung around in the whipping breeze on the walkway to the Bellagio and watched the fountain show before heading in to look at the conservatory. We also took a little picture in front of a sign announcing a rivalry between my sister and I that I didn’t even now existed – until this vacation.

After “cheering” our favorite for the Stanley Cup, we made our way into the Conservatory at the Bellagio – always filled with incredibly breath-taking floral displays to coincide with the season. The displays are always…always so beautiful and this one was themed to a Japanese/Cherry Blossom theme and was gorgeous. You should know – I took a ton of pictures! 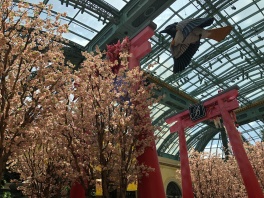 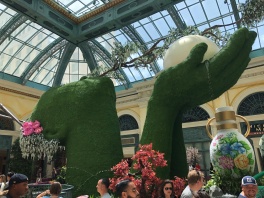 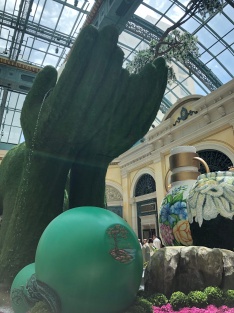 It was much less crowded than I remember in previous visits, which is probably what allowed for taking so many pictures that miraculously turned out with no random people in them – victory!

We decided that while we were this close to Jean Phillipe Patisserie, we couldn’t just pass up the opportunity to get some of the most gorgeous dessert creations ever and so we walked just mere steps down the corridor from the Conservatory, hopped in line next to the chocolate fountain and got ourselves some dessert masquerading as artwork – I chose the Oreo Brownie (with flakes of gold leaf, naturally…) and my little sister got an Earl Grey Mousse Cake…my Mom by passed the desserts for some gelato and we were all in heaven with our choices. 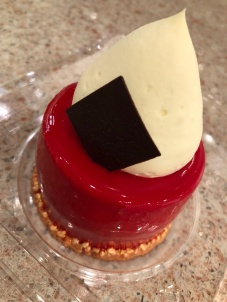 Once we finished up our eatable artwork, we hopped back in the car and headed for the Rio – my Mom and sister had tickets to zip line across the sky 51 stories above ground and well… I was going along to watch but certainly nothing more. They signed their lives away and we hopped on the elevator to ride up…up…up to the top of one of the Rio’s two towers, where a set of cables connects the two buildings and adrenaline junkies are sent careening across the sky at speeds of 30+ miles per hour. The views from the top of the tower were incredible though… 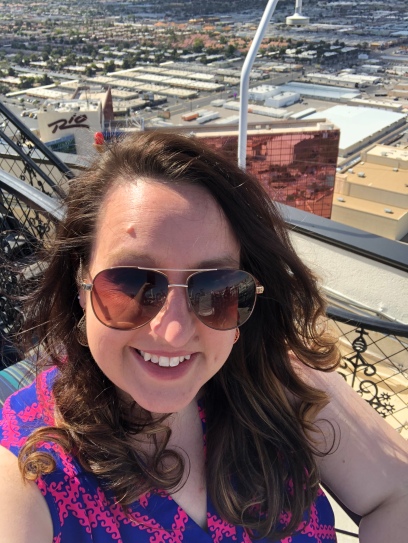 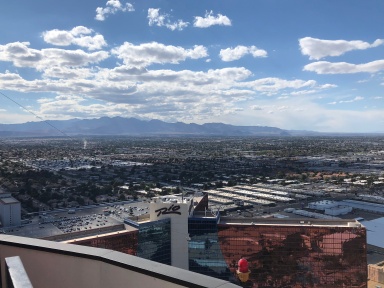 I suppose I can share the pictures I took of the crazy people…eh…. I mean the adventurous people who decided to soar across the sky in nothing but a white bucket seat and strap…ha! 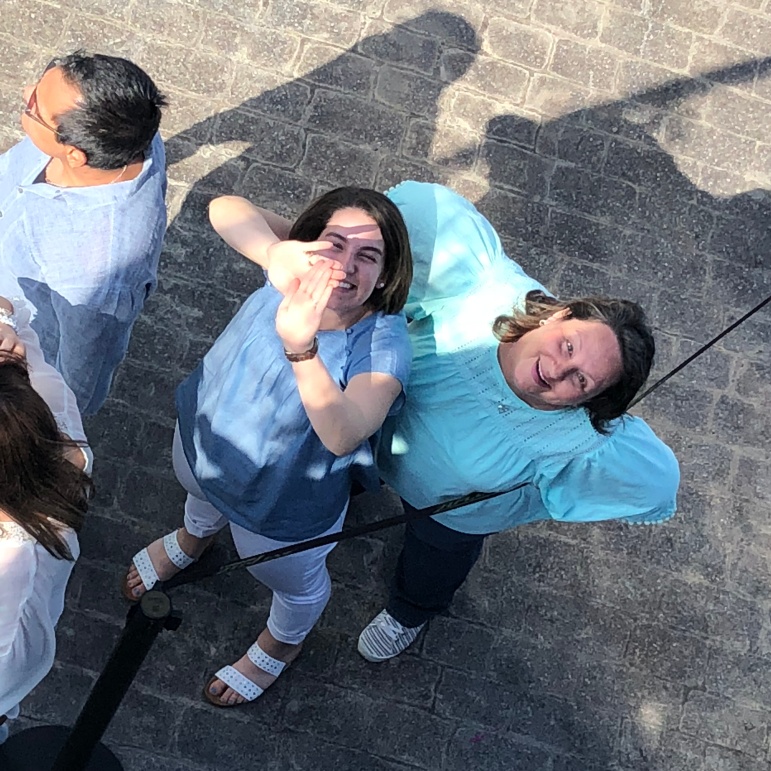 I’m not kidding about the views though – they were spectacular. I thoroughly enjoyed my time sitting on the couches scattered around the viewing platform, which becomes a bar at night. The wind was swirling around the building, there was the laughter and delighted screams of people taking on their fears and the sun was shining. Not a bad way to spend some time!

We made our way back down to the lower levels of the Rio and found our way to KISS mini golf and I bet you didn’t even know that was a thing – but it is and it’s a delight. And I’m not just saying that because I won, ha-ha! Everything glows, there is KISS music playing, the course tells the timeline of the band and all the holes are themed to their rather extravagant personalities – I putted a ball through a giant version of Gene Simmon’s shoe! 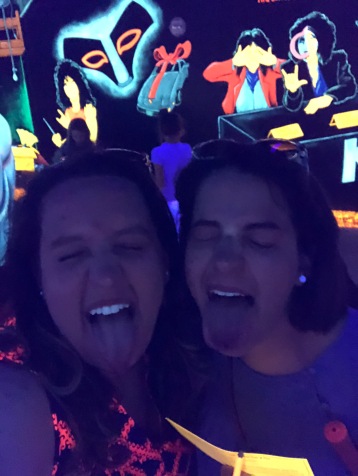 The black light was further confirmation I’d picked the perfect day to wear my white jeans for the first time – they glowed delightfully bright and made for some really excellent photos. Also, that picture in the middle is what happens when you take a picture and don’t realize that the flash is going to go off. Whoops! 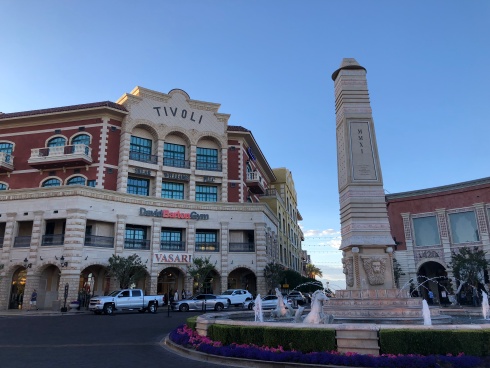 We had thrown around the idea of going to Fremont Street but we decided after we finished our golf game that we’d really rather go get dinner somewhere and then just go back to Lindsey and relax…maybe watch the sunset over the mountains from her balcony. And that’s exactly what we did – we went and had dinner at a restaurant called Echo & Rig (excellent service) and then went home, sat on my sister’s balcony and watched the sun set…and also watched a couple little bats flit and float around.

Sunday morning I woke up with a headache – I woke up quite early and tried to take some medicine and go back to sleep, but that never quite happened. I ended up watching the most recent episode of Patrick Melrose and gradually…throughout the morning, the headache waned. It finally went away completely when we went to grab brunch at Hash House A Go Go – a place with crazy good food and insanely large portions. I had the grilled cheese and it was to die for…but I couldn’t finish it all. Whoosh. So yummy though.

We spent the afternoon packing up our things and then went over to Red Rocks Casino to see Solo: A Star Wars Story in IMAX 3D – the movie was really good! We grabbed dinner at Jason’s Deli near the airport and then…much too quickly, it was time to head through security and board our flight.

The flight must have been a fairly easy one – it was a red eye flight and while I was convinced I wouldn’t sleep, I must have because I honestly don’t remember taking off and while I remember a couple instances of waking up on the plane – I do remember that the four and half hour flight passed in what seemed like a blink. We left Vegas shortly after the sun set and arrived back in DC as the sun was coming up – and thank goodness we had Monday off, because you better believe that I took a nap on Monday, ha-ha!

Another wonderful vacation with memories that I will hold dear for my whole life!