This post is coming to you all the way from sunny Las Vegas, Nevada! I suppose what I really should say is that I wrote this post before I left and now I’m (most likely) chilling on my little sister’s balcony, staring at the desert mountain range as I hit “publish” on this post – it’s all the same, right?

I’ll soon be California bound for the next five days and three of those five days will be spent at the happiest place on Earth – Disneyland! I think I may have mentioned it (once…if not more than once) but Pixar Fest is in full swing at Disneyland and so along with all the awesome things that Disneyland normally has to eat, there are also tons of Pixar-themed goodies to partake in!

I thought – why not make this Friday’s Five all about the delicious things I plan to eat while I’m at Disneyland? Sound good to you? Prepare for a virtual sugar coma…

One. Millennial Pink Macaron – I absolutely love a good macaron…and the description of this one has my mouth watering: strawberry buttercream dipped in white chocolate, filled with coconut lime jelly. Yes please! I’ll take two! 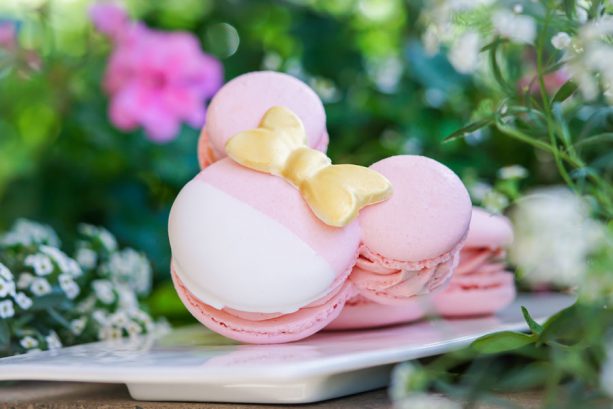 Three. Toy Story Alien Macaron – Remember that I love macarons in all forms and one that is green and shaped like the little aliens from Toy Story? You better believe I’ll take one! The filling in this macaron is blackberry and lime, something tells me I’ll love it! Four. Pixar Luxo Ball Cake Pop & Up! Grape Soda Cake Pop – Another thing I am all about is cake pops and these are just two of the many that Disneyland has to pick from that are Pixar-themed. The Luxo Ball cake pop is a traditional vanilla cake pop styled to look like the Pixar logo and the Up! Grape Soda cake pop has a grape center! I can’t wait to try these two…and more!

Lest you think I’ll only be eating sugar…well…honestly; I do plan to eat at least one meal a day that isn’t made of all things sweet but that’s the only promise I can make as far as food is concerned!

That’s all for today – I hope everyone has a wonderful weekend!

Just painted my room... and bought a new comforter. Watson has already made himself at home. 🤨😂
Almost a whole decade... in brief... some of these collages work better than others in this format. 🤷🏻‍♀️ Oh well.
Hmmm - I find this odd since one of these is from 2018... 🤷🏻‍♀️🤷🏻‍♀️🤷🏻‍♀️ So it’s the Top Nine of “2019”... 😂
When the @nationals win the World Series - you have a winning Christmas Day! #fightfinished #ibackthenats @fpsantangelo7 @masnnationals @dankolko
Wearing his new gnome coat to look at lights with @tbirdchick14 & the rest of the fam.
Found this rando at Clyde’s in Ashburn & decided to invite her home for Christmas... 😂😂😂 Love you @tbirdchick14