It was a weekend y’all – there was so much weekend that I am splitting my usual weekend re-cap post into two posts because I honestly just took so many pictures and I don’t want to have to pick and choose! Even split into two posts – they will still both be pretty photo heavy – but that’s alright! Let’s do this!

Friday was a day off from work and so after sleeping in, I finished up watching Thor: Ragnarok and just enjoying my morning with some time spent being lazy and playing with my puppy. Shortly after lunch, I got myself together and we headed into DC for the next 36 hours…for baseball, the National Arboretum and all kinds of other things. 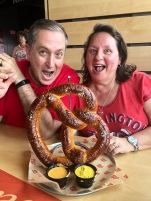 We checked into our hotel – the Hampton Inn & Suites Washington DC – Navy Yard, which is literally right across the street from Nationals Park. We jumped in line pretty early because it was Max Scherzer Cy Young bobble head night and even though the gates don’t open until 5:05…lines were forming at 4:20! Once we made out way into the park and secured our bobbles, we grabbed at table at the Budweiser Brewhouse for dinner.

We ordered a giant pretzel to start – and yes, it was literally bigger than my head! And deliciously tasty, of course! I had some kind of crazy tater tot, philly cheese steak mash-up for dinner and if that sounds delicious, you’d be right! It was unhealthy but absolutely delicious and perfect ballpark food! We had to make a stop in the team store and the Marvel gear immediately pulled me in and I had to get a Nationals/Marvel t-shirt (which will be perfect for my upcoming trip to Disneyland) before we made our way to our seats.

We sat in the 100 section for this game and I love sitting so close to the action! Although, early in the game a fly ball came soaring towards us and smashed the video board above my head. I went into duck and cover mode and definitely tensed up in a crazy way…apparently the ball came pretty close because the usher for our section came to make sure I hadn’t been smashed with a ball. Eek!

The game started off a little risky – Gio Gonzalez loaded the bases before getting out of the jam without the Phillies scoring and then the Nationals came to bat and started things off with a bomb – literally. Bryce Harper hit a home run on his first at bat…and then after Trea Turner got on base, Matt Adams also hit a home run and the score before the first inning ended was 3-0! Bryce came back in his second at bat and hit another home run … the home runs were all over the place on Friday night! 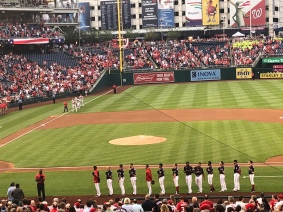 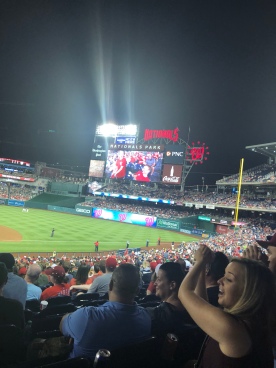 There wasn’t really a rain chance on Friday night but shortly after the fourth inning started, some rain drops began to fall. After a short, light shower it seemed like the rain was gone but then the rain returned in earnest… and the seats we were sitting in weren’t quite under the awning. Everyone ran for cover, the game was placed in rain delay and holy cow does the concourse get loud and cramped when everyone is hiding out from the rain!

After a 40 minute delay and a serving of mint chocolate chip gelato, the game resumed in the fifth with the Nationals at a 7-0 lead. Gio left after the sixth inning and Trevor Gott came in as relief…and immediately let the Phillies score three runs before he was yanked – yikes! Wander Suero took over and was followed by Ryan Madsen in the eighth and Brandon Kintzler shut things down in the ninth, holding the score at 7-3 for the Nationals to get the win. 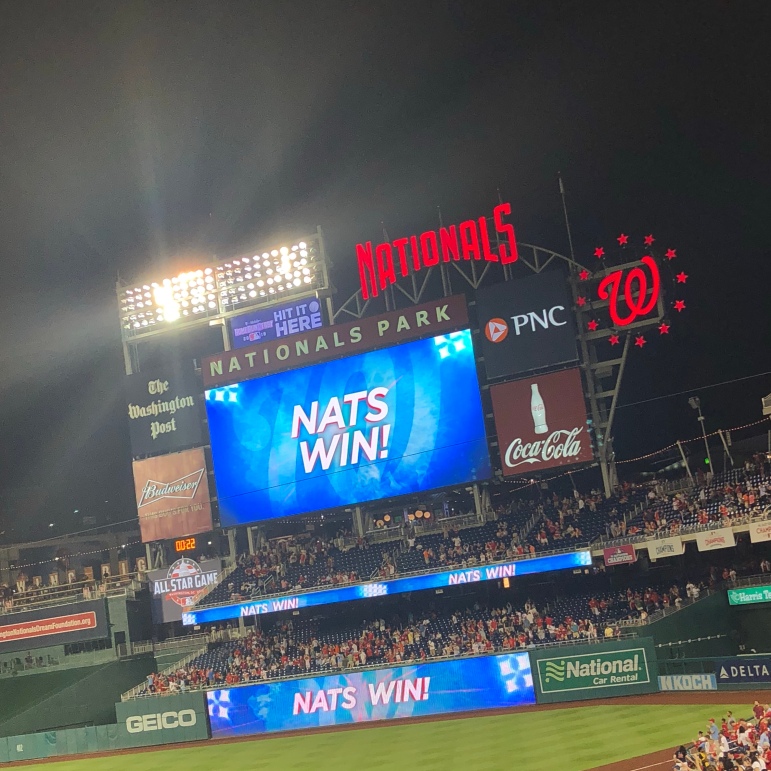 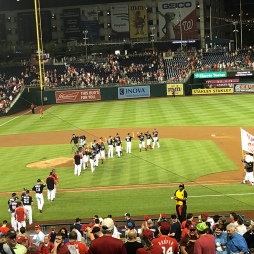 I grabbed a couple snaps of the park as we made our way out – and happily only had to walk across the street to the hotel for the evening’s end. It was an excellent game and I cannot believe we got to see four home runs! 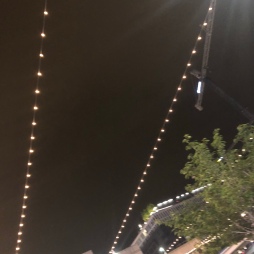 I’ll get back to all the other weekend things that aren’t baseball related tomorrow – but for now, on Saturday afternoon we headed back to Nationals Park for Star Wars Day at Nationals Park and the second of three games with the Phillies!

The giveaway was a pair of Han Solo/Boba Fett socks and when we first entered the park, the usher at our gate was adamant that the socks were only for 12 and under…which was odd because not a single advertisement showed an age limit and every fan entering the gates balked. Finally someone pointed out that the giveaway was for everyone, the usher admitted her mistake and my Mom reached over and helped us to two pair of socks! 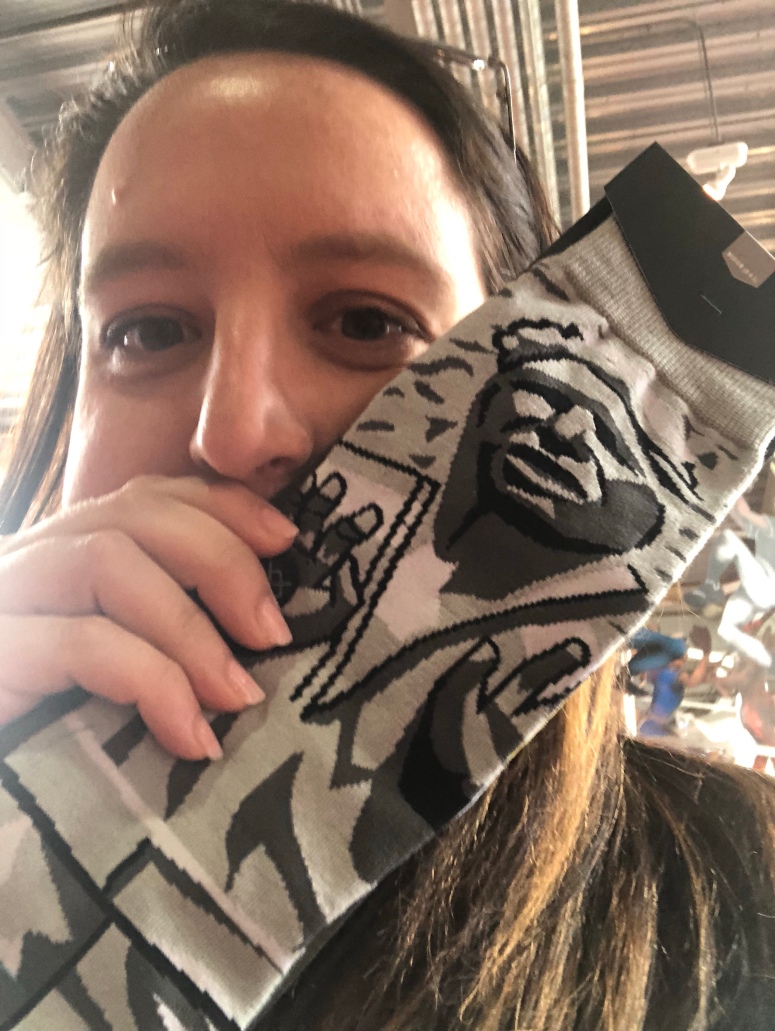 Of course – there were numerous people dressed in fantastic Star Wars costumes and plenty of opportunities for photos. And if you’re wondering if I took tons of pictures, then the answer is yes – I took all the pictures.

We had a late lunch at the park – I had some delicious BBQ Pulled Pork Nachos that were (again) super tasty but also super unhealthy. Oh well! We ate our lunch at the picnic tables on the third level, watching the Star Wars trivia game happening on the big screen. 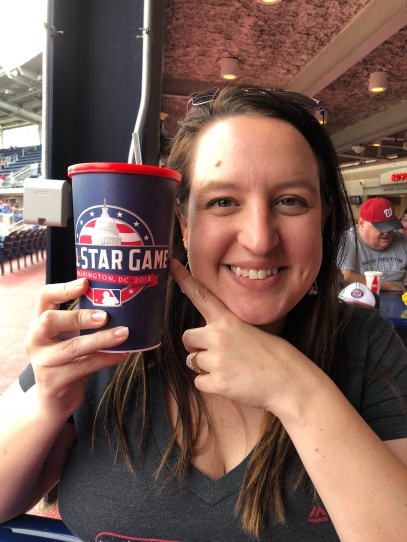 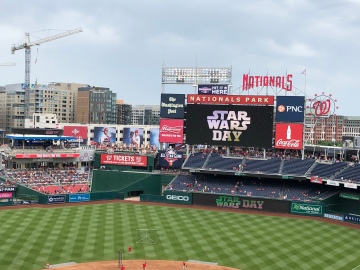 We made our way to our seats – the 300 level for this game – and settled in for some baseball. The weather; after the rain, changed dramatically and I was glad I had my jacket on hand before even the first pitch was thrown. The wind blowing off the river behind the stadium made it quite cool and so I was glad to be able to bundle up! In classic Star Wars fashion – there was a pre-game crawl, which is always fun!

And of course – all the players in the line-up had their pictures altered to be superbly Star Wars-esque, as the theme of the day required. I had to snap a picture of each player in their Star Wars best, ha-ha! 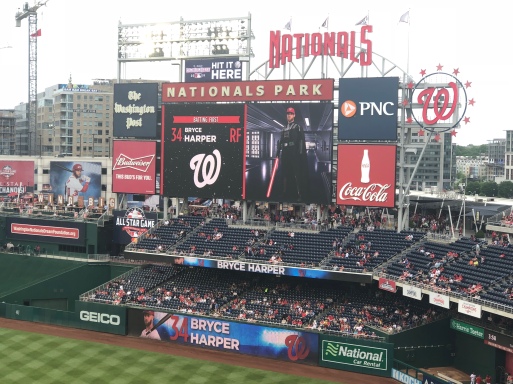 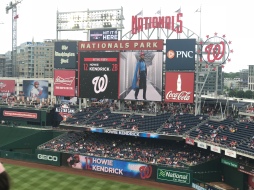 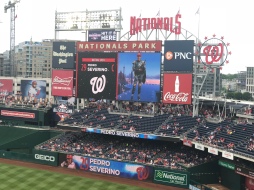 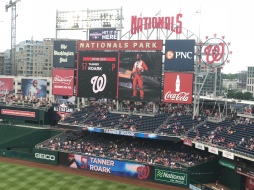 Saturday’s game was less edge of your seat than Friday night’s game – Tanner Roark allowed the Phillies to get a two run home run in the first inning and then held them scoreless after that, but the Nationals bat … which had been on fire on Friday night, were quiet on Saturday afternoon. 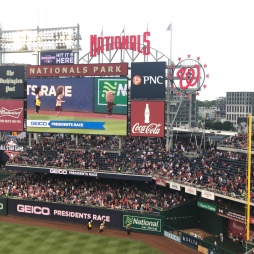 I got myself a Wookie Cookie to munch on as the game progressed, watched “Lando” win the President’s Race at the middle of the fourth and in the fifth inning, Wilmer Difo put the Nationals on the board with a solo home run. Unfortunately, that was the sole run the Nationals were able to score for the entire game… *sigh* 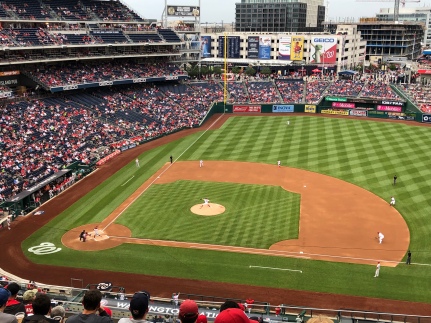 The wind kept picking up and rain was threatening for most of the game, so after the 7th inning we decided to make our way toward our car and head for home. The game would end with a 3-1 loss for the Nationals but the good news was that the Nationals won the game on Sunday and therefore won the series with the Phillies. 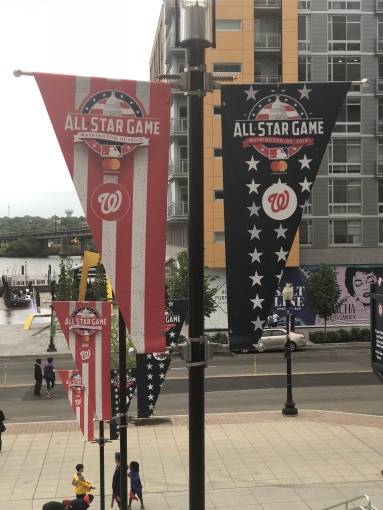 It’s the seventh of May and the Nationals have played six games so far this month, they’ve won 5 of the 6 and that’s a much better start to the month of May then they had in April. Here’s hoping this winning trend continues!

That’s all for the baseball portion of the weekend re-cap! I’ll see you again tomorrow to re-cap the other parts of the weekend, which will include lots of flowers!